You never know what you are capable of doing until you do it.  Somewhere along the way someone must have said this to me, but I didn’t listen.  Well, while completing my first Tough Mudder obstacle race, I learned the true meaning of that phrase.

I did an obstacle race in May called Warrior Dash.  That was just a warm up for what happened yesterday.  Tough Mudder absolutely lives up to its title.  It was extremely tough.  And muddy.  Well, that part I didn’t mind and the toughness I didn’t really mind either.  Ten miles of obstacles, 20 obstacles total and lots of time to think in between.

There was a lot of walking and running through the woods of Maine yesterday.  During that time, I had a lot of time to contemplate exactly how I got to where I ended up.  A couple of years ago, I was kind of a couch potato.  I mean I did more than the average person, but sometimes I was satisfied with just spending an entire day on the couch.  That suited me just fine.  Of course I loved taking photos and that involved a certain amount of effort and walking, but mostly I was sedentary.  And that’s how I would stay.  Or so I thought.

How had I ended up crawling through mud on my heads and knees and doing the activities I will describe in this blog entry?  Well, some kind of long dormant athlete awoke in me.  I realized that after a very long break that I enjoyed athletics and that I didn’t need to care what other people thought.  I was doing this for me and that was fine.

What?  We’re this far and no photos?  Well, there won’t be one of mine for a long while because I didn’t take photos of what I did because I was busy doing it and there wasn’t really a way to take any photos of it.  You’ll just have to take my word for it.  At the end, there will be a photo I took.  The photos I am posting are pictures of the obstacles I did that were the most challenging.

Here’s the first one called Walking the Plank.  Isn’t that a friendly sounding name for an obstacle?  Here’s a photo of it: 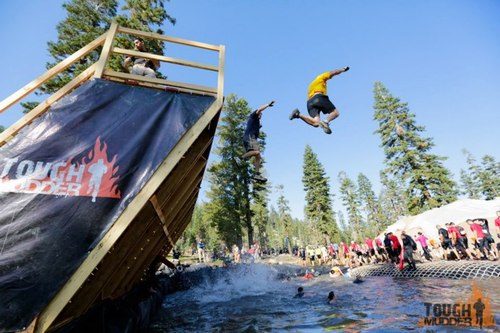 Yeah.  That looks sorta scary.  What was funny about it was that I really wanted to do it and didn’t even think for a second about any kind of fear until I got to the very edge.  I looked down and got scared.  Not a paralyzing fear, more of a “um, so that looks like a great distance down.”  I guess not fear, more realization.  Realization.

I wanted to remember what the feeling on the way down was and honestly it was like flying through the air very slowly until I quickly hit the water.  I submerged myself as deep as I could for some reason.  I thought that would be safe and then floated back up and swam out as soon as possible.  I have to admit.  It wasn’t just fun.  It was insanely fun.  I would totally do that again.

But then we get to an obstacle called Everest.  This was pure insanity. 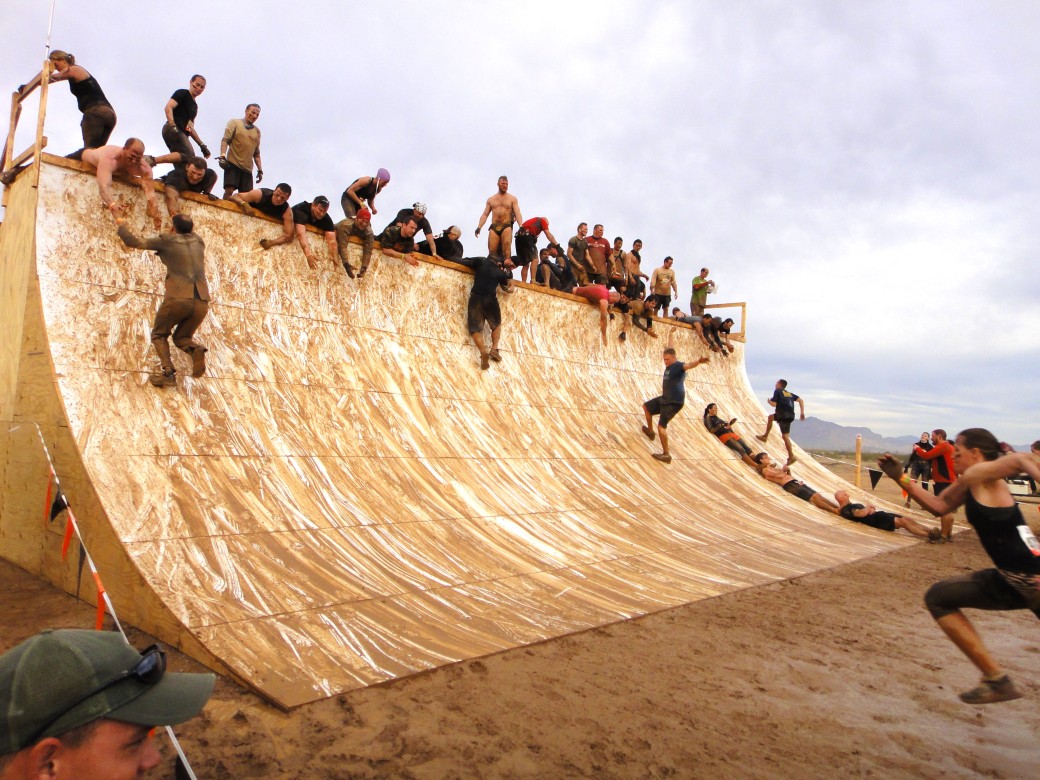 It looks crazy and it so totally is.  When I saw this thing I nearly just bypassed it.  It looked impossible.  Completely and totally impossible.  It is a greased half pipe made from slippery material.  You run as fast as you can up the side and get caught by people on the top who take you over.  Sound easy?  Well, it isn’t at all easy.  Not in the least bit.  You do this obstacle at mile 9.5 of a 10 mile course, when you are so exhausted after 15 or 16 other obstacles.  You have no idea how you are even going to get up there.

I had to do it four times because I got up there.  Either people caught you and dragged you over, or down you went, hitting and scraping your knees on the way down.  I did this three times.  But the people up on top helped me and that was really special.  Really really really special because it made me believe that somewhere out in this world where most people couldn’t care less about their fellow human being, people care enough to help you over this thing.  I ran up a fourth time and got to the top.  Yeah, I have two massive bruises on my arms to show for it and a couple of others on my knees but I made it to the top.  And I thought I would never make it up there.  I guess you never know what you are capable of until you actually do it.

Well, here is finally a photo taken by me: 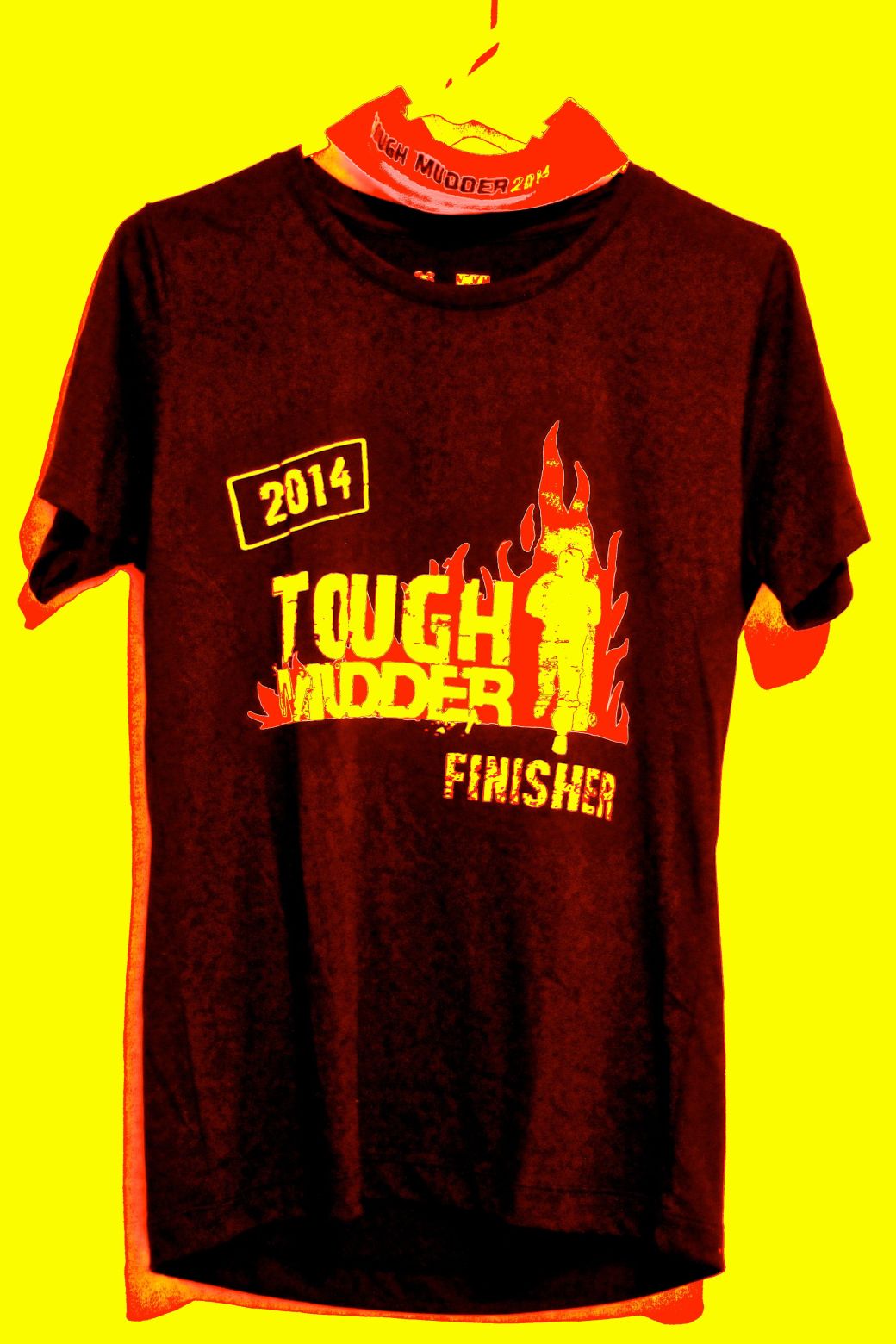 After all of that, all I got was a lousy t-shirt and headband.  No, I’m totally kidding.  This is hanging on my wall at home, headband and shirt.  I guess I’ll treat it like the yellow jersey from the Tour de France.

At the beginning of the race, I was standing in a big crowd getting ready to go.  They had a man getting us ready by telling jokes but also a few serious things.  He made us take a knee and make a pledge.  I thought to myself that a couple of years ago, I never would have done anything like that.  I would have thought it was so corny and stupid and why would I ever want to be associated with anything that stupid?  But there I was in the middle of it, feeling at home.

I’m glad I got off that couch.