On the other hand, I do sincerely hope that this entry goes viral because I’m going to use this forum to express my own views.

Tuesday night was election night.  I rushed out of work to vote before the polls closed.  What an election campaign it was in this 2016.  Here’s a photo of me actually voting and my actual ballot:

Obviously, I’m voting for Hillary, but I’ll get to that later.

I started paying attention to elections in 1984, when I was still in elementary school.  The first election I remember really well was Reagan vs. Mondale that year.  I don’t remember the particulars, but the adults around me seemed to be very excited about what was going on. Four years later, I remember the race between my work neighbor Michael Dukakis and Bush the Elder and a little character who fate dealt an ugly hand to, Lee Atwater.  Even as a little kid, I knew that was an ugly campaign.

In 1992, along came a man from Hope, Arkansas named Bill Clinton.  I was a teenager by the time he ran for office and that is the man who changed everything.  Suddenly the president was my parents age and he played the sax on the Arsenio Hall show.  No presidential candidate had ever even dared to do such a thing.  Here was a guy who smoked pot and embraced let’s say a lot of 1960s type values.

The next election I paid attention to was when Obama ran for president in 2008.  This was the first election I voted in, as I had not yet become a U.S. citizen up until that point.  I was proud to cast my vote for this intelligent, classy individual.  Four years later, he ran again Mitt Romney and I against proudly cast my vote for Obama.

For those of you who have read down this far, you can tell I’m a Democrat.  I’m actually really liberal in my views, almost borderline Scandinavian in my views when it comes to government and the role it should play in our lives.

Either way though, the presidential campaigns I watched and voted in were hard fought and could get ugly at times, but nothing, NOTHING, prepared me for the ugliness that 2016 brought.  NOTHING.

Here we had a deep Republican field and a Democratic field that included a former first lady, senator and an affable hippie Jew from Vermont.  As soon as I found out Bernie Sanders was running for president, I immediately wanted to vote for him.  Here was an individual who was talking about all the things nobody was talking about.  Fair wages.  Lessening of student loan burdens.  It all made so much sense.  No way that guy was going to win.

I dutifully went to the polls and voted for him, just to see my state go for Hillary.  Well Bernie, you tried.  Keep tilting at those windmills my dear man!!!!!

So it seemed that the race was going to go for Hillary, but what for the Republicans?  The field was crowded, interesting, boring, whatever adjective you want to use but one candidate stuck out — Donald Trump.  The builder?  The businessman??  Yeah, that guy.

Now I’ve “known” Donald (we’re on a first name basis he and I) for a lot longer than the electorate at large.  I remember Reagan vs. Mondale/Ferraro from 1984, but round about that time as well, a man was making a big name for himself in the place where I grew up, Manhattan.  In the 1980s, even as a kid, you knew who Donald Trump was.  He was kind of the PT Barnum of real estate development.  A master showman.  Entertaining, telegenic, annoying, whatever you called him.  The man got people’s attention including this person, who was at the time of his ascent all of about eight or nine years old.

Fast forward to 2016.  Now this was a presidential campaign like no other.  Arguments went out the window.  It was just one ugly episode after another, one ugly word uttered to the other, one right after the other.  To steal words from the great Mike Barnicle, it was like Donald Trump needed a venom transplant every time he spoke.  It was the ugliest campaign I have ever seen and that included Dukakis vs. Bush the Elder in 1988.

But there was no way Trump was going to win.  The man spewed so many racist, homophobic diatribes that there was absolutely no way he could win.  The mass of people in America would not allow him to win.  I mean whenever anyone brought up the possibility of him winning, I thought of this meme I shared multiple times on my Facebook page and this page for that matter:

A Donald Trump victory.  Madness.  Were we actually going to wake up to this??:

On Tuesday night, I did what most Americans did.  I watched “The Crown” on Netflix, which BTW, an amazing piece of programming, while pressing re-load on the New York Times website.  At first the numbers slowly crept up in favor of Hillary, then Trump, the Hillary and then, then something strange happened.  The numbers crept up for Trump, but not Hillary.  Was this actually going to happen?  Was he going to win??  I fell asleep, secure in the knowledge that I was going to wake up to see headlines that said “Hillary Clinton wins Presidency.”

Now as an aside, I wasn’t really looking forward to voting for her either but something changed in my mind.  Whatever reservations I had, she had 40 years of public service and to my knowledge had never uttered as ugly of words as Trump uttered before and during the campaign.

Tuesday dawned and with it the election results.  I was in utter shock and horror when headlines like this greeted me:

“Locker room talk.”  Grabbing women by certain regions.  Lawsuits.  Tax returns.  This and much more had been exposed during the campaign and yet somehow Trump had won.  My Facebook page turned into a war zone.  The people I saw on the way to work were ashen.

Now the Republicans think people are angry because a Republican won, but that’s not it.  That just misses the point completely.  This isn’t about sour grapes about a man from the opposing party being elected.  This is about a man being elected who despite spewing racist, dangerous garbage talk about women, minorities, Muslims, blacks and immigrants was still elected to the highest office in this land.  Horrifying.

I work in a start up international school and I could immediately see Trump making the visa process difficult, if not impossible for incoming students.  And how would those students be treated?  Was it now OK to harass immigrants and non-natives based on the color of their skin and their accents?  I mean if the holder of the highest office in the land can do that, why can’t the mass populace??

I thought back to what people said about the rise of Adolf Hitler.  He was popularly elected, promising to make Germany great again.  And then a small right was taken away from a small part of the populace.  And then another small right was removed.  Pretty soon, society was divided.  Pretty soon certain people had to wear yellow stars to identify themselves.  Downfalls in society don’t begin with huge moves.  A right here is removed, a right there…..

I hope this is not the future we face.  I hope this isn’t going to become an ugly country, unwelcoming to foreigners.  Somehow in the face of the election of a person whose personal views in no way mirror the actual things that make America great, could American society persevere through this?

Wednesday, the world was treated to this picture: 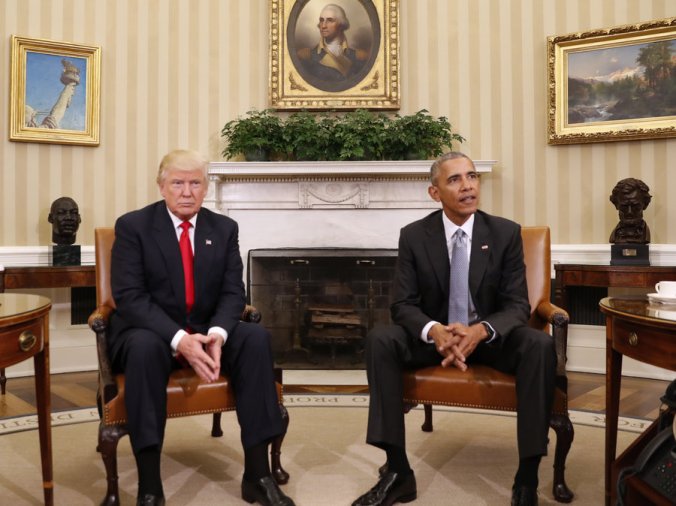 No words need to be exchanged here.  The body language says it all.  But somehow seeing Obama made me think that if these two sworn mortal enemies could sit together, maybe the next four years won’t be that awful.  Or that at least there are still people in this country who believe in equal treatment for gays, minorities, immigrants and women.  Who believe that everyone deserves healthcare.  Those who believe that above all else, people should be treated with dignity.

In the words of another great philosopher, Jerry Garcia — we will get by.  We will survive.

Yup.  Right from my kitchen.  A Trump doll I bought years ago.  I can’t believe I’m going to write President Donald Trump.

Strange days are these.