I like to joke I decided to live in Boston after a guy wearing a red cup ran by me after the Boston Marathon in 2009 and I decided to stay here permanently.  Its not exactly true, but the marathon is a big reason for why I live here.

The marathon to me is like ski season.  Every year is my favorite year.  I guess I’m easy to please.

The marathon though is extra poignant.  Boston persevered after the bombing in 2013 in the most beautiful way.  Every marathon since that awful April day is more precious and more valuable.

This marathon of course was full of poignant moments.  Boston favoriteMeb Keflezighi in his last marathon stopped to embrace the family of little Martin Richard, who died in the marathon bombing in 2013.  In 2014, I watched Meb win the whole thing, proudly.  He’s my sentimental favorite and a kind of adopted Boston native son.  I saw this image (that I did not take) yesterday after the marathon and I burst into tears: 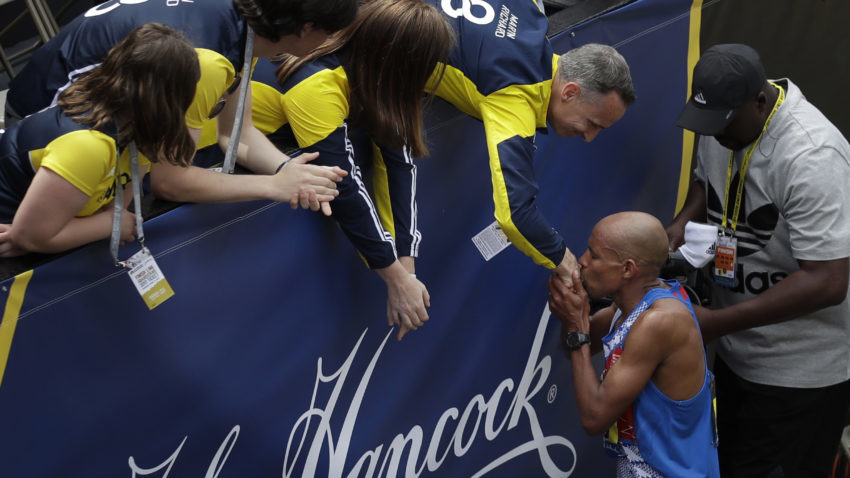 Its such a telling image of a city with a huge beating heart.  That’s why I love this city so much.  I hate when people say stupid things about this place, like about the restaurants or the bars closing early or whatever.  This place has a huge heart and that heart is open to everyone.  I never lived in a place with as big of a heart as Boston.

Yesterday saw a lot of big heart moments.  Marine Jose Sanchez (photo TK) ran the whole thing hoisting a giant American flag, pole and all.  Sanchez lost one limb in Afghanistan and had the other severely damaged.  Team Hoyt, now just son, were out on the field.  Dick Hoyt after thirty some odd marathons is now happily retired with son Rick in the marathon with a new friend.

The whole thing is a show of the humanity and spirit of my hometown.  You see how I left out adopted.  Boston you’re my home: