This is going to a sad entry and a very long one as well.  I’m just warning everyone.

I’m starting this entry with a quote from Queen Elizabeth, which I guess is appropriate given the excitement about Prince Harry getting married recently.  Its also not appropriate because this is an entry about a person who disliked royalty!!!!

I’m here to write about my friend Allan Martinsen, who passed away a couple of weeks ago.  Even writing that is still a bit surreal for me.  Allan had cancer for a long time and passed away from it, but this entry is going to be about his life, not his death.

So with many friendships, people meet and its like love and first sight.  Psychologists even talk about how you have friendship at first sight and I’ve definitely experienced that, but that wasn’t the case with Allan.  That part always made me laugh.

In 2017, I talked about the incredibly terrifying experience of going to Denmark and how it all affected me.  In the first few weeks of being in Denmark, I met the people I would live with in the dormitory.  Then there was a group of people that just didn’t speak to me.  One of those people was Allan.  If someone had told me that I’d still be talking about Allan over twenty years after we’d met, I would have said you were crazy.

In the first two months of living in Denmark, in the famous Albertslund, in the equally famous 7V bloc, I became friends with many people in the dorm.  Well, more accurately I left my room long enough to stop crying to talk to the residents.

Then at the end of October, something happened.  Allan suddenly started talking to me.  The something that happened was a kind of romantic drama I was involved in at the dorm.

This is the part where I should address that romantic entanglement.  Here its going to be addressed quickly because this entry is not about that, but it really wasn’t that way.  I’m not going to go into exactly what happened, but I’ll just put in here that normal people don’t go around destroying other people.

So here I am in this deeply emotional situation with no one to turn to and there was Allan, who had seemingly watching everything that was going on.  Then suddenly, Allan started talking to me.  I didn’t understand what was happening to me with this “relationship” and Allan helped me.  I remember one of the first things he ever said to me was “we always hurt the one we love,” and somehow that gave me comfort.

It also turned out that Allan was in his own complex romantic entanglement at the time, so in a way we were there comforting each other.  We started talking and spending time together.  One night we were sitting around having some warm beer.  I was the only person in the group who wasn’t Danish.  I was surrounded by people speaking a language I didn’t understand or speak.  I turned to Allan and remarked on this and he said “you aren’t one of them.  You are one of us.”

I wish I had told Allan how much this meant to me.  He had no way or knowing or maybe it was obvious, but I had never been part of anything, one of anything.  I was always on the outside.  I’m an immigrant and when I was 12, I went to the single worst place on planet earth.  Its called Valhalla, New York, a place that education and knowledge of the outside world had forgotten.  Allan didn’t know that either, but it was probably obvious.  I obviously did not belong in Valhalla.  I was definitely not one of them, but here, thousands of miles away from that horrible place, I was finally one of something.  The impact of that was hard to overstate.

The growth in our friendship coincided with the Christmas holidays.  One day I walk into the TV room and everyone is gathered around watching some kind of Christmas special featuring the Muppets.  To my great surprise, Fozzie bear, Miss Piggy and Kermit were speaking Danish.  Now I did not know that the muppets spoke Danish.  Allan explained to me that in fact the Muppets were Danish and their voices were dubbed over in English for the rest of the world, but their native language was actually Danish.  Twenty years later this whole thing still makes me laugh.  But Allan hadn’t even told me the real secret yet.

It turned out that Santa Claus was actually Danish as well.  I laugh just writing this.  Allan, along with the rest of the weirdos in the kollegium, were firm in their belief that the jolly Jule Man (his Danish man) was one of their countrymen.  I told them that I had always known that Santa lived in the North Pole, but Allan told me that the North Pole was much too cold for him and that he in fact resided in Greenland, where the climate was less intense.

Needless to say, I have repeated these stories about Santa and the Muppets to anyone who will listen for the past twenty years or so.  And I will continue to do so.

A few days before Christmas I had to go back to the United States.  This was also very difficult for me.  Allan gave me his email address when I left and this started the next phase of our friendship.

I’d not really used email up until this point.  Communicating with Allan was really fun.  Allan would fill me on life in the block.  Who was dating who.  That the television was broken and how upset the residents were about that.  The correspondence was really funny.  I read a book by Bill Bryson a while ago about a kind of pen pal relationship he had with a friend in Australia and how fascinated he was with her life.  This was kind of like the correspondence with Allan.  I could still be part of the life of the block, even though I wasn’t there anymore.

Yes, that is the Swedish chef of the Muppet show fame.  And for those who don’t know, the Danes and Swedes have a long standing insane rivalry.  Its not a hatred.  Its more like siblings that really know each other who know exactly how to tease each other.  I also realized at that moment that Allan and I were mutual fans of the muppet show.  He told me his favorite characters were those guys who sat in the audience and made fun of everything.  Here they are, in case you don’t know who they are: 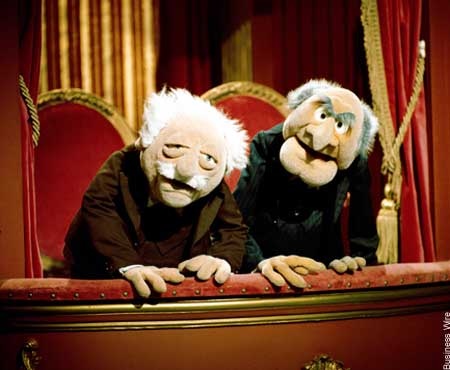 I can see how Allan would like these guys.  He was really good at making really witty comments while things happened in front of him.

This was demonstrated for me on a trip I took to Denmark before I started graduate school in 2003.  I went to see Allan and we went for a walk around Assistens, a very Danish place.  Assistens is a full functional cemetery that is also a park.  I had wanted to see the graves of Niels Bohr and Hans Christian Andersen.  Allan wanted me to see something different.

We walked around Assistens and we saw the grave of a very young Danish Hell’s Angel.  He told me the story about the fellow who was buried there, who had either been murdered or had fallen off his bike.  This guy’s grave was a black, vertically placed rune stone that the Hell’s Angel had specially asked for.  We stood there looking at this grave and Allan turns to me and says “yes.  It is meant to be phallic.”  I had thought this and I hadn’t wanted to say it.  Laughing at the cemetery would have been really unseemly.  I think we both laughed at that moment.

The next year, Allan got some life changing news.  He was going to become a father.  The correspondence continued, with his typical humor surrounding it.  He sent me suggestions for his new child’s name.  Most of them including Icelandic thorns and were hilarious.  I was glad when his daughter was born with the relatively normal name of Joanna!!!!

I saw Joanna when she was newly born.  Here’s a picture of that: 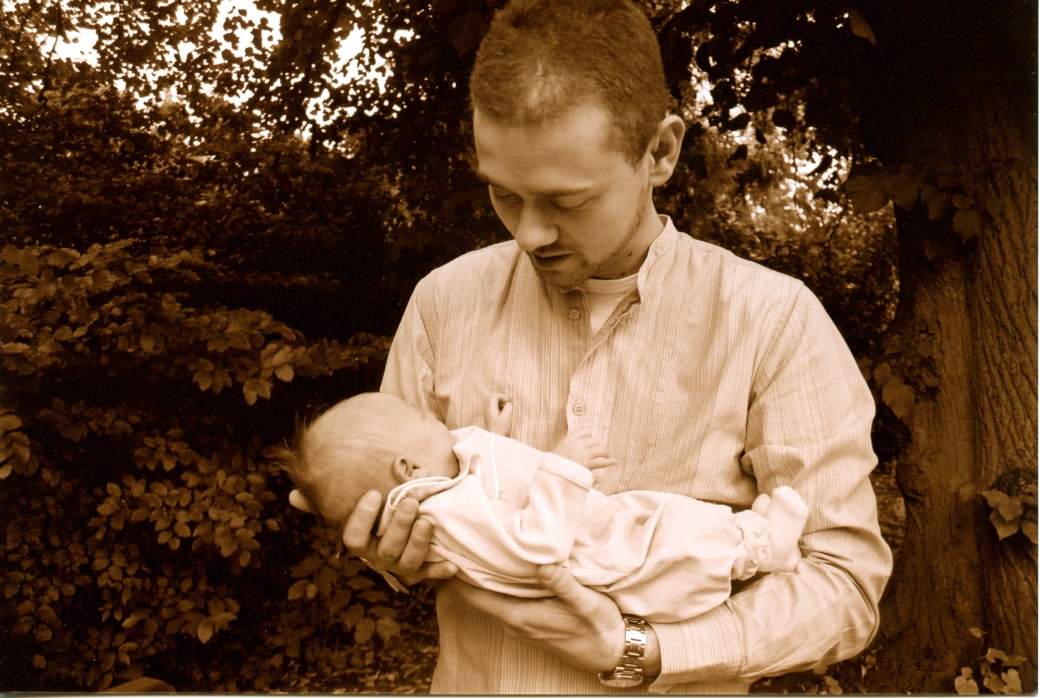 You can see from Allan’s face how in love he was with this new arrival.  This was a new chapter for him.  A son arrived a few years later to complete the family.

Interestingly, Allan and I both became teachers.  In one of the early messages he sent me, he revealed to me his cancer diagnosis.  I remember just saying to myself that he was going to be OK, that he just had to be OK.

To be completely honest, I did not know how to talk to him about the cancer.  I felt like I couldn’t do anything for him and that I had to rely on him to let me know how he was doing.

About a month ago, Allan let everyone know that his health had taken a turn for the worse.  He messaged me and let me know that things were not great.  I told him that I was going to pray for him and that my friends at my church were also going to pray for him.  We had a little back and forth about God and beliefs.  Allan told me not to give the people in the church any money and that studying religion had ruined it for him!!!!!  It was vintage Allan, sitting in the audience, laughing as the world goes by.

And then a few weeks ago, came the news I was dreading.  Allan had passed.  To be honest, I’m still processing all of this.

What I can say is that going to Denmark and meeting Allan, helped me find the job that was right for me and to find what I really loved to do in life.  I work with international students, just like I was in Denmark, making people who feel like they are on the outside to become a part of something.

This entry is long and there are a lot of details in here.  I wrote it because I want his daughter Joanna and his son Elias to know that their father was a very special person who was loved by many people.  Part of me wishes I had told Allan just how much of an impact he had on me.  For someone who probably felt like he also didn’t fit in and probably sometimes felt unloved, a lot of people did love him.