I have the best schedule.  There I said it.  One time I heard Tom Friedman, the New York Times editorialist say that he has the best job.  He visits different countries and gets to write about them.  Well, fair enough, but I really have the best schedule.  I work Monday to Thursday and I have Friday off to just kind of do whatever I want or what I call rejoining the land of the living.  Now the days from Monday to Thursday are long and I do work on Saturday but its a very good schedule.

A few Fridays ago, never mind how many, a very dear friend asked me to join her on a small road trip to New Hampshire.  Usually I just see it covered in snow, so I thought it would be nice to see it just regular.

Off we went to this antiques shop in the middle of nowhere.  I mean I’m sure it was in the middle of somewhere but I didn’t even really know where we were.  It was raining but as soon as I walked in, I found the shop really fascinating.  Of course I grabbed my camera and started taking pictures immediately.  I quickly asked if I could take pictures in the store and the owner said “just don’t take pictures of me.”  It was kind of funny.  He said it in this dry, droll kind of way.

It struck me that every single object in the store had some kind of separate story.  There was a door that I thought was a door to state legislature because it had the same kind of font on it that I had seen in the Massachusetts State House.  It turned out it was a door that had been used in a TV show to supposedly be the Rhode Island legislature.

There were countless claw footed bath tubs and even a stand up shower.  There were these little bottles that doubtless has some kind of turn of the century wellness medicines in them with names of companies that are far out of business.  There were entire sections with just doors in them or just bannisters, all of different architectural styles and from different time periods.

It was really interesting because truly, every object tells a story about us, who we are and who we were: 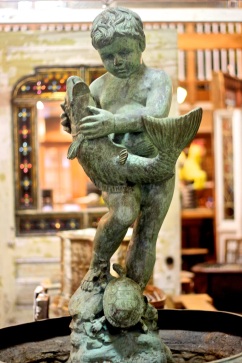 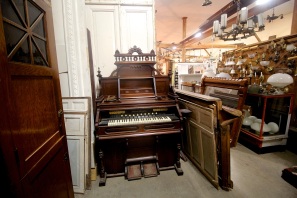 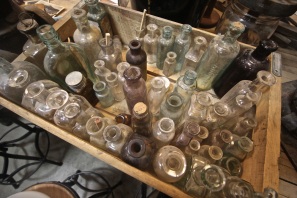