The flakes from the sky.  I thought I’d have more time with the fall, but winter is here.

The first snow of the season is again something I have grown in appreciation for since I moved to Boston.  The snow is such an integral part of living here that the first snow is cause for celebration or consternation or whatever.  I know what it means for me.  Time to get my skis waxed and prepare for the best six months of the year.

Today when I saw the snow falling I decide to take a little turn around North Station, where I usually end up on Tuesdays and Thursdays.  Per usual, I was only going to walk a block or two.  My days are exhausting, particularly Tuesdays and Thursdays.  But I kept walking, all the way over to Government Center.  The Soviet city hall is actually more attractive by night, covered in snow.  Oh and I went over to photograph the little area between Haymarket and Faneuil Hall that I call the one block of Europe, covered in snow.  That stretch gets yet more beautiful in the snow. 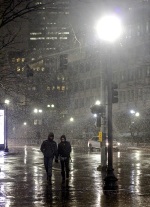 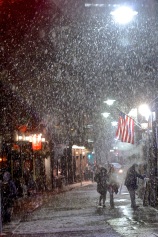